skip to main | skip to sidebar

Beer (in London? Gee, imagine that.)

Tomorrow (1 August) will the start of the Great British Beer Festival, which will be held at Earl's Court until the 5th. Also known as the Biggest Pub in the World, the festival will host a wide range of beers and real lagers from the UK and abroad, including 450 real ales.
Expect a full report. Until then, visit the Great British Beer Festival online:
http://www.camra.org.uk/page.aspx?o=195496

The new development of Tate Modern will be much more than just a building; it will be the anchor for a dynamic new quarter of London – a new creative campus stretching southwards. Bankside Urban Park, involving the improvement of the urban realm through the creation of pocket parks and other small-scale developments, is a major project being led by Better Bankside with the support of Tate and other landowners. The Urban Park will connect newly landscaped areas around the gallery to open spaces across Southwark.

Click here to read the rest of the press release.

A nice day trip out of London is a visit to the Norman Foster designed Sainsbury Centre for Visual Arts on the campus of East Anglia University in Norwich (about two hours by train from Liverpool Street Station). This public art gallery and museum houses a variety of interesting permanent collections, not the least of which is the Robert and Lisa Sainsbury Collection of works spanning 5,000 years of human creativity, with "modern work by artists such as Henry Moore, John Davies, Alberto Giacometti and Francis Bacon" alongside art from Africa, the Pacific, the Americas, Asia, Egypt, medieval Europe and the ancient Mediterranean.

Click here to read a review of the SCVA's current Pacific Encounters exhibition. 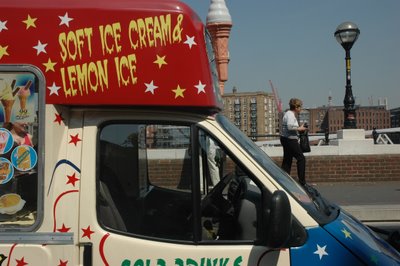 Summer Chiller
Photograph by Tiki Chris © 2006
Interested in contributing a photograph of London to this blog? Click here for details.

WANTED: your photos of London

Interested in sharing your photography with a wider audience? If you have a London photograph that you think might interest the readers of this blog, I would love to post it here at ontoLondon. In addition to posting your image, I will be happy to include a brief biography about you as well as your contact details, if you wish.

Similarly, if you have a story, lead, or anything else that might interest ontoLondon's readers, feel free to send the details my way.

To view examples of photography on this blog, click here.

A great summer day in Richmond

I had the pleasure of spending this past Sunday with good friends at two complementary spots in the suburban-y, Thames-side, borough of Richmond.

Our day started with a tour of Marble Hill House, "the last complete survivor of the elegant villas and gardens which bordered the Thames between Richmond and Hampton Court in the 18th century." The house (if I may speak of it so diminutively) was begun in 1724 for Henrietta Howard, mistress of King George II (when he was Prince of Wales) and friend of the likes of poet Alexander Pope. As interesting as the home was a short film we caught during our tour about Henrietta's remarkable life and incredible will.

After our tour, we strolled along the Thames (even took a little ferry across it), until reaching our next destination - Stein's, a Munich-style Bavarian beergarden right on the river in view of Richmond Bridge. Between the five of us, we ordered two Bayerische Schlachtplatte für 2-3 Personen (that's the Bavarian Sharer platter for 2 to 3 people) along with some pretzels and were set ... and oh yes, we also ordered a few rounds of Erdinger wheat beer from the tap, which is just about as refreshing as a drink can be on a hot summer's day.

Only about a 30-minute train ride from Waterloo Station, Richmond is an excellent place to keep in mind should you want to "get away" from central London but still be able to get back soon. 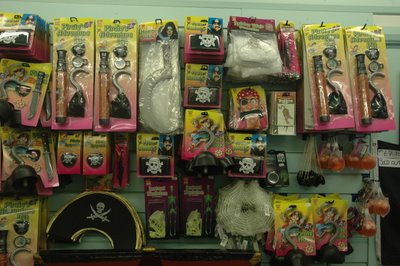 Golden Hinde Gift Shop
Photograph by Tiki Chris © 2006
Interested in contributing a photograph of London to this blog? Click here for details.

In a previous post (click here), I reviewed one of my favorite Japanese restaurants, Noto. Unfortunately, their "flagship" Barbican/London Wall restaurant is closed indefinitely. Also, their website, http://www.noto.co.uk/, doesn't seem to be up-and-running either.
Bummer.

Britain is experiencing its hottest July day ever after temperatures hit 36.3C (97.3F) near Gatwick.

Back in May (was this my first ontoLondon post?), I mentioned that Under the Flag: The early life, adventures and piracies of the famous Long John Silver before he lost his leg, a new play by Simon Bent, was to open 9 July at Shakespeare’s Globe Theatre (click here for that post).

Yesterday, I caught a performance of this show, which essentially works as a prequel to Robert Louis Stevenson's Treasure Island. The play even goes into how Mr. Silver came to be called "long" (um ... you'll have to see the play to have that clarified, but any naughty notions you might be entertaining will probably be confirmed).

Now, I wouldn't rank this play anywhere near said classic novel, but it is faithful to Stevenson, fun (in a pillage and plunder sort of way), and historically accurate. The dialogue is Elizabethian and at times downright filthy (a jar full of a monkey's what?). There's even some full-frontal in the first act. Much of the story takes place along the Barbary Coast (argh!) during the height of the fascinating Republic of Bou Regreg.
Catching Under the Black Flag marked the end of a week flanked by piratical entertainment (last Sunday, I went to see the new Pirates of the Caribbean movie - click here for that review on my Tiki Chris blog). And, shiver me timbers, I'm a happy boy for it.

As with any visit to a performance at the Globe, pay for a seat (I've seen even spry teenage groundlings' knees buckle) , pay the extra pound for a cushion, and, if the show's during the afternoon or early evening, wear sunscreen. 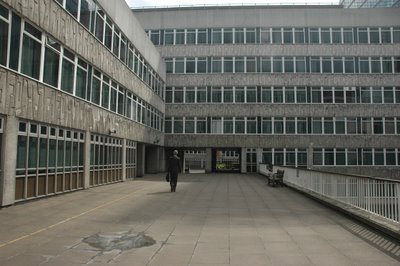 On the way to Moorgate Station
Photograph by Tiki Chris © 2006
Interested in contributing a photograph of London to this blog? Click here for details.

A few weeks back, I came across the Ghanaian food vendors, Jollof Pot, at the end of the Architecture Week's Sheep Drive. In a previous posting (click here) I commented on how much I enjoyed the 'heaping plate of blackeyed peas and tomato stew with rice' that I ate and how I hoped 'to run into Jollof Pot again.'

Well, lo and behold, the other day while running an errand, I passed through Exmouth Market (not even five minutes from my flat), where a nice Jollof Pot lady was busy getting things prepped for lunch. I had noticed other Exmouth Market food vendors at lunchtime on other occasions, but had never noticed Jollof Pot.

I went and ran my errand, then returned to a building queue at the Jollof Pot stand. When my turn to order came, I asked if they were there during the week. "Monday to Friday - maybe on Saturday," was the response. I got the impression that Jollof Pot might have other stands throughout London, but I can't verify that. So, if you like spicy, yummy, stews, I recommend making it to Exmouth Market sometime during the week or, at the very least, keeping an eye out for these folks next time you find yourself at an event with food vendors.

Torres Strait Islands myths and legends for your viewing pleasure

Works by the Torres Strait Islander and printmaker, Dennis Nona, are on display at the Rebecca Hossack Gallery on Windmill Street (between Charlotte Street and Tottenham Court Road) until Saturday 2 September 2006 ... and are well worth stopping by to have a look at.

The exhibition, Sesserae: the works of Dennis Nona, features 70 pieces from 1991 to 2005, which are all based upon the myths and legends of the Torres Straight Islands. The Torres Strait Islands are a group of more than 270 small islands lying in the narrow waterway between Australia's Cape York Peninsula and the island of New Guinea. These islands are part of Queensland, a constituent State of the Commonwealth of Australia. However the people are Melanasian, ethnically and culturally more akin to their neighbors in Papua New Guinea than to the Aborigines of continental Australia.

The centrepiece of the exhibition, Sesserae, relates the ancestral story of a willy-wagtail bird. The story, as is the case with all Nona's works in this exhibition, is rich and intricate in how it details community, social and cultural norms, such as the application and transfer of knowledge about constellations, weather patterns and animal behaviours, and hunting and fishing traditions.

The future of architecture is now ... at the Barbican Centre

Future City: Experiment and Utopia in Architecture 1956-2006 exhibtion at the Barbican Art Gallery (running until 17 September 2006) features lots of good stuff and asks its viewers, "What would it be like to live in a hairy house, a floating city, or an inflatable pod? Pure fantasy or the shape of things to come?" Good questions but, um, let me think about it. The problem with the exhibition is that, as with the above quote, it's just one long list of questions with hardly any breathing room to fully ponder any of its components and come up with one's own answers.

Much like the V&A's Modernism exhibition (click here for that review), Future City falls victim to its own ambition. A half century of architecture is a lot to take in. Twenty-five years, a decade, or one specific vein of experimental and/OR(!) utopian architecture might have allowed for a more engaging experience. From long-winded explanations of long-winded ideas by the likes of Guy DeBord to overly large images of Pierre Cardin's bubble house near Cannes, Future City is too much to take in at once.

Still there are good pieces, such as Kurksawa's Floating City and Koolhaas's Delirious New York, worthy of a viewing. And to see it at the much-maligned and futurist (in a 1970's kinda way) Barbican seemed most appropriate. 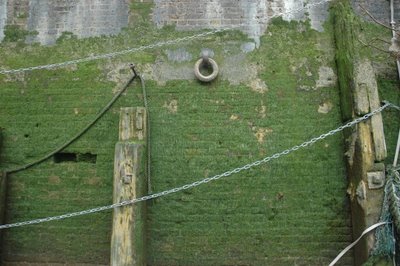 Banks of the Thames at Low Tide
Photograph by Tiki Chris © 2006
Interested in contributing a photograph of London to this blog? Click here for details.